Altria Group Inc. MO -1.43% wrote down its investment in Juul Labs Inc. by more than a third and now holds it at a price that values the e-cigarette maker at about $24 billion.

The Marlboro maker cited unexpected shifts in the market, including proposed U.S. bans on e-cigarette flavors and regulatory crackdowns abroad, for its decision to cut the value of its investment by $4.5 billion.

“Of course, we’re not pleased to have to take an impairment charge on the Juul investment,” the company’s chief executive, Howard Willard, said on a conference call Thursday. “We did not anticipate this dramatic a change in the e-vapor category,” he said.

Facing an accelerating decline in cigarette sales, the tobacco giant last year agreed to pay $12.8 billion for a 35% stake in Juul, making it one of Silicon Valley’s most valuable startups. Now, blamed for a rise in teenage vaping, San Francisco-based Juul is bracing for a planned federal ban on e-cigarette flavors that represent more than 80% of its U.S. sales.

The embattled company plans to cut between 400 and 600 jobs by the end of the year as part of a reorganization aimed at mending damaged relationships with regulators, The Wall Street Journal reported on Monday.

Are you a smoker or Juul customer? Do you know someone who is? How has your/their behavior changed this year? Join the conversation below.

Altria on Thursday also lowered its profit growth forecast for the next three years to a range of 5% to 8%, down from its previous forecast of 7% to 9%.

The number of adult e-cigarette users in the U.S. rose to 12.6 million in September, including six million who vaped exclusively, Mr. Willard said.

The Marlboro maker aims to offer a menu of cigarette alternatives, Mr. Willard said, including a tobacco-free nicotine pouch in which Altria recently invested and a heated tobacco device that Altria launched in the U.S. in September through a partnership with Philip Morris International Inc. That device, called IQOS, is currently available in Atlanta and will go on sale in Richmond, Va., next month, Altria said.

Hedge fund Darsana Capital Partners recently wrote down its investment in Juul by more than a third, valuing the company at $24 billion. And Fidelity Investments this week disclosed that it had slashed the value of its Juul investment by nearly half to a price that valued the startup at around $20 billion. 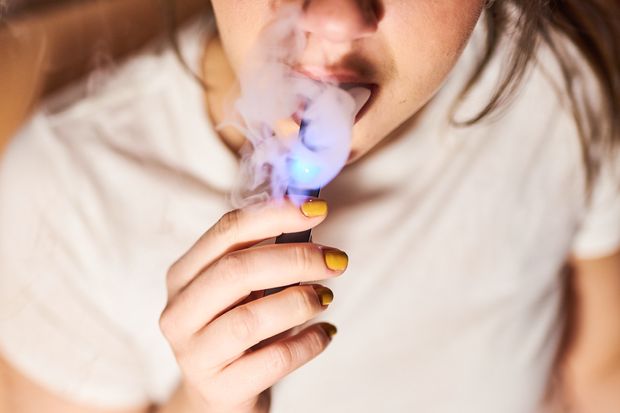 Follow the latest news and top stories about the public health crisis around e-cigarettes from The Wall Street Journal.

The fund cited the Food and Drug Administration’s plan to remove from the market all e-cigarettes except those formulated to taste like tobacco, as well as a formal rebuke the agency sent Juul in September for making unauthorized claims that its products were safer than traditional cigarettes.

The Wall Street Journal calculated the valuation of about $20 billion assuming the fund hadn’t bought or sold any Juul shares since the end of July. Bloomberg earlier reported Fidelity’s write-down.

Juul is the subject of several investigations, including a criminal probe by federal prosecutors in California. By May, the company must submit for FDA review any products it wants to remain on the U.S. market beyond that point.

Juul’s sales have fallen since the Centers for Disease Control and Prevention in September warned the public to stop using e-cigarettes as it investigated a mysterious vaping-related lung illness. The agency has since narrowed that warning, advising people not to vape THC, the psychoactive ingredient in cannabis. Juul’s products haven’t been linked to the illness.

Shares of Altria rose 1.2% in morning trading on Thursday.

—Juliet Chung contributed to this article.

Write to Jennifer Maloney at jennifer.maloney@wsj.com