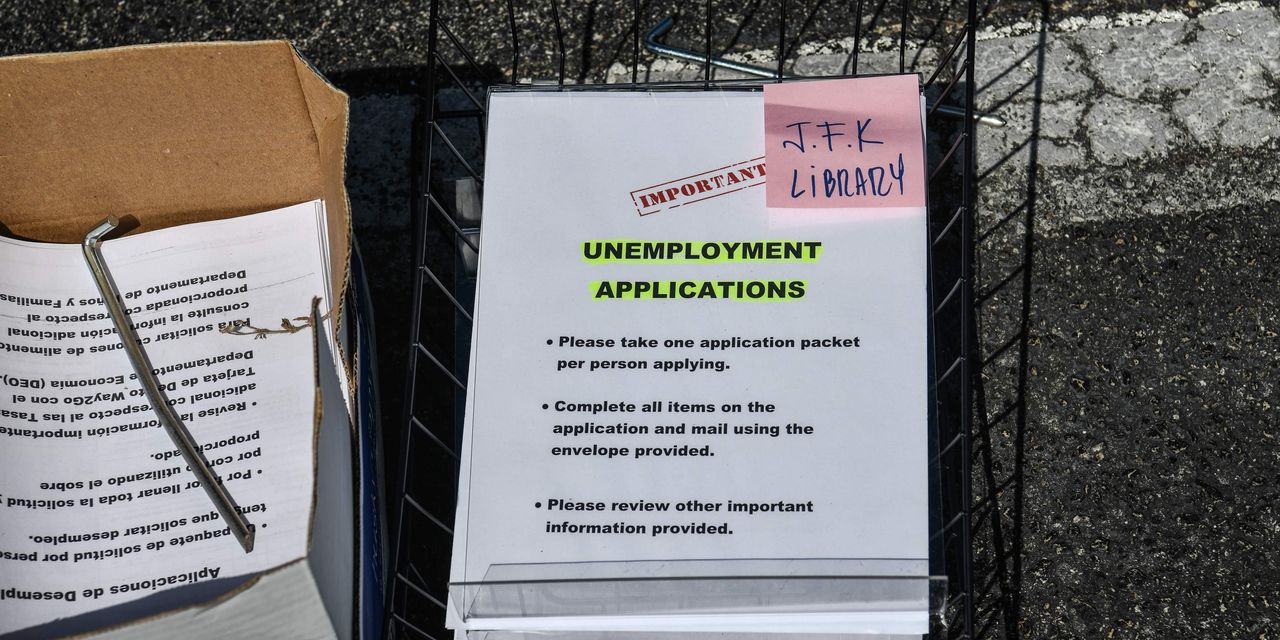 WASHINGTON—The April unemployment rate surged to a record 14.7% and payrolls dropped by a historic 20.5 million workers as the coronavirus pandemic hit the economy, wiping out a decade of job gains in a single month.

Employment fell sharply in all broad business sectors last month and across all groups of workers, with particularly large increases in unemployment among women, college dropouts and Hispanics.

The U.S. jobless rate eclipsed the previous record rate of 10.8% for data tracing back to 1948, though it was well below the 25% rate economists estimate was reached during the Great Depression. The job losses due to business closures triggered by the pandemic produced by far the steepest monthly decline on records back to 1939. By comparison, nearly 2 million jobs were lost in one month in 1945, at the end of World War II.

Many economists project April will be the worst single month of job loss during the pandemic, and the pace of layoffs has already shown signs of easing this month. But they say it could still be many months before the labor market returns to a point when U.S. employers consistently add jobs, and it probably will take years for the economy to fully replace the jobs lost in April.

The Labor Department survey of households showed a large number of workers who said they were “employed but absent from work.” Many of those should have been counted as a temporary layoff, which would have caused the unemployment rate to be almost 5 percentage points higher, the department said.

U.S. stocks rose, gaining after the jobs numbers weren’t quite as bad as feared and signs of an easing in trade tensions between Washington and Beijing.

The job losses and high unemployment mark a sharp pivot from just a few months ago, when the economy was pumping out hundreds of thousands of new jobs and joblessness was hovering near 50-year lows. The jobs bust has been widespread.

Average hourly earnings increased by 7.9% in April from a year earlier, likely reflecting that many low-wage workers lost their jobs, while more white-collar employees worked from home.

The longer-term severity of the employment crisis depends on factors such as the path of the coronavirus and how fast consumers start to visit businesses and open up their wallets, as the economy reopens. Such reopenings are already materializing in South Carolina, Georgia, Texas and elsewhere, though often with restrictions.

Further, the sharp rise in unemployment last month mainly reflected temporary, as opposed to permanent, layoffs. Of Americans who newly lost their jobs in April, 88% reported being on temporary layoff, meaning they are more likely to quickly return to their jobs when the crisis ends. In March, 47% of the newly unemployed were on temporary layoff, while 29% were in February.

Rebecca Smith, 47 years old, was temporarily laid off from her New Jersey bus-driving job in mid-March and hopes to be back behind the wheel by June. After surviving Covid-19, the disease caused by the new coronavirus, she is looking forward to returning to work and seeing colleagues.

“I’m eager to see my extended family,” she said.

General merchandise stores, including warehouse clubs and super centers, were one of the very few bright spots in Friday’s jobs report, with employment increasing by 4.7% in April from a month earlier.

It will likely take a while for industries directly affected by the coronavirus, including restaurants, hotels and transportation, to recover.

Colby Hill Inn, in Henniker, N.H., is normally fully booked on weekends, but guests canceled all room reservations because of the pandemic. “Without that income coming in, it is really hurting us,” said Jefferson Brechbühl, a co-owner of the inn.

The inn would typically operate with about 20 employees during its busy season, which starts this month. But after furloughs, the inn is instead offering restaurant takeout services with six workers, including some who have seen their hours cut.

Mr. Brechbühl said reopening guest rooms would be critical to bringing back employees such as a sous-chef who is making more money on expanded unemployment benefits than he would at his job. So far, the lodge is mainly funneling these food-service revenues toward guest-room refunds, he said.

The April unemployment rate masked the current degree of joblessness. Some Americans whose jobs were cut aren’t actively looking for work because many companies have implemented hiring freezes, or they worry a return to work would raise their exposure to the coronavirus.

Although the regular unemployment rate excludes these so-called discouraged workers, another unemployment measure, called the U-6, captures them. That rate hit 22.8% in April, well above the 17.2% peak right after the 2007-09 recession.

Lower-income Americans are most vulnerable to the effects of job losses, said Steve Preston, chief executive at Goodwill Industries International.

“They have no resources. It takes time to get unemployment, if they qualify,” Mr. Preston said, referring to financial benefits that states offer to those out of work. He added most people coming to Goodwill’s job centers for help are seeking support filing for unemployment benefits.

Lynne Reback of Sanford, Fla., filed for unemployment benefits on March 15 after she was laid off from her bartender job at the Orlando International Airport. But she didn’t receive her first payment of $275 until April 16. The following two weeks she received a $600 payment, less than the $875 she was expecting.

More on the Economy

She said she is worried about making her mortgage payments and the possibility of a housing foreclosure. “We don’t want to lose it, but at the same time, we don’t know how long this will take,” she said.

The widespread nature of the job losses extended to health care, as those not working to fight the pandemic are seeing fewer patients for routine checkups and, in some cases, only offering emergency procedures.

Steep job losses in industries such as health care where women are represented in high numbers likely contributed to a sharper rise in unemployment among women than men. The jobless rate for women climbed to 16.2% in April, compared with a rise to 13.5% for men.

Friday’s report showed the number reporting themselves as employed fell by 22.4 million. The share of the population working fell to a record low of 51.3% in April after steadily rising from about 58% since the last recession to just above 61% in February.

Many companies and Americans are now drawing on federal and state aid.

Get a coronavirus briefing six days a week, and a weekly Health newsletter once the crisis abates: Sign up here.

Valori Wells, owner of Stitchin’ Post, a quilting-supplies store, said small-business loans through the federal government’s Paycheck Protection Program allowed her to bring back three employees who were laid off as a result of the pandemic.

The business, based in Sisters, Ore., is operating with eight employees—down from 13—who are filling shipping orders and handling social media, among other tasks.

Ms. Wells said she hopes to bring back all of her workers, but is unsure when she will be able to.

“I can’t predict what’s going to happen,” she said. “All I can do is hope that at some point I can get back to some sense of normalcy within our business—or new normalcy.”

—Gwynn Guilford contributed to this article.

Write to Sarah Chaney at sarah.chaney@wsj.com and Eric Morath at eric.morath@wsj.com