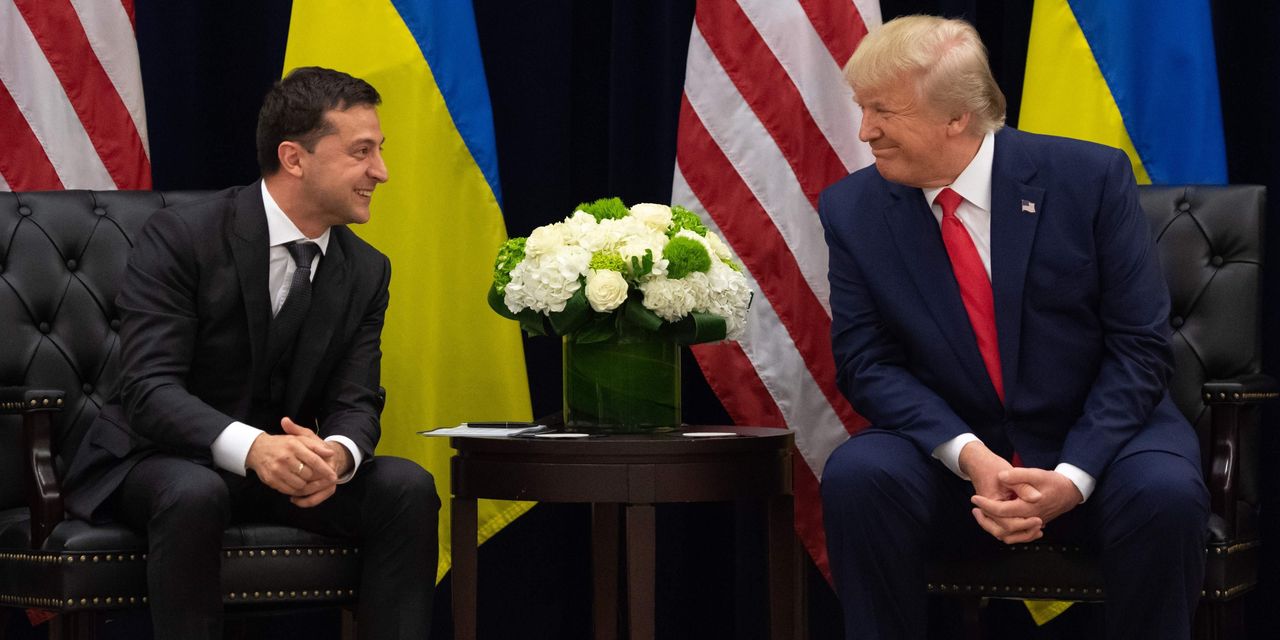 The Editorial Board
The Wall Street Journal

The White House on Wednesday released the transcript of President Trump’s July call with Ukrainian President Volodymyr Zelensky, and the news is that Mr. Trump was telling the truth about it. The conversation was largely routine diplomacy, and even the reference to Joe Biden was less than promoted by the press. Good luck persuading Americans that this is an impeachable offense.

The five-page transcript shows that Mr. Trump called to congratulate Mr. Zelensky on his party’s victory in Parliament. After niceties, Mr. Trump waxes on as he often does that the U.S. “spend[s] a lot of effort and a lot of time” on Ukraine, while complaining that European countries don’t do their share. At no point does Mr. Trump threaten a withdrawal of U.S. aid to Ukraine.

Mr. Trump does ask for a “favor”—that Ukraine look at 2016 election meddling. “I would like you to find out what happened with this whole situation with Ukraine, they say Crowdstrike,” he says, referring to the company that investigated the 2016 hack of the Democratic National Committee.

He also disparages former Special Counsel Robert Mueller—no surprise there—and notes that “they say a lot of it started with Ukraine.” Mr. Trump is clearly still sore about the attempt by the Hillary Clinton campaign to dig up foreign dirt on him, but there is nothing wrong with asking a foreign head of state to investigate meddling in U.S. elections.

Only after that does Mr. Zelensky mention Mr. Trump’s personal lawyer, Rudy Giuliani, who has been publicly urging the Ukrainians to investigate Joe Biden and his son Hunter’s activities in Ukraine. Mr. Zelensky says he is “hoping very much” that the former New York mayor comes to Ukraine. He promises that all “investigations will be done openly and candidly.”

Mr. Trump responds, “Good because I heard you had a prosecutor who was very good and he was shut down and that’s really unfair.” After some praise for Mr. Giuliani, Mr. Trump adds that “there’s a lot of talk about Biden’s son, that Biden stopped the prosecution” of corruption in Ukraine. Mr. Trump also says that he intends to get Mr. Giuliani and Attorney General William Barr to call, and he asks that Mr. Zelensky work with them.

That’s it. No quid pro quo. The references to the Bidens are in the context of fighting corruption, not as a prerequisite of U.S. aid. Mr. Trump was unwise to mention Mr. Biden, but the tenor of the conversation is congenial. It’s amusing to hear the same critics who call Mr. Trump an oafish thug on a daily basis now say this was all a subtle masterpiece of extortion. When is Mr. Trump ever subtle?

Democrats are making much of Mr. Trump’s references to Attorney General Barr, which were also imprudent in the Biden context. But the Justice Department says nothing came of it, that Mr. Trump never asked Mr. Barr to make that call, and Mr. Barr has never communicated with Ukraine, or with Mr. Giuliani about Ukraine.

Mr. Trump certainly was reckless to use the former New York mayor as an anti-corruption envoy, or for anything else. Rudy is an unguided missile on TV and can’t be much better in private. The Justice and State Departments have plenty of people who can work with Ukraine on corruption.

Join Paul Gigot in Los Angeles on Wednesday, October 1 for a discussion with Opinion columnists and political experts on the current state of the 2020 election field. Register with WSJ+.

Keep in mind that all of this came to public attention because of a leak about a whistleblower complaint from the intelligence bureaucracy. The accusation is that Mr. Trump somehow attempted to cover this up, but it looks on the evidence released Wednesday that the Administration acted by the book.

The complaint went to the intelligence community inspector general, who found it credible and deserving of submission to Congress under the whistleblower statute. But the director of national intelligence general counsel rightly sought legal guidance from the Justice Department Office of Legal Counsel, which is the authority on executive branch legal obligations.

The White House on Wednesday released OLC’s legal opinion that the inspector general was wrong because Mr. Trump is not a member of the intelligence community and that a “routine diplomatic call” does not count as “intelligence activity.”

Meanwhile, Justice says its Criminal Division evaluated the IG’s August referral that the phone conversation could be a violation of federal campaign finance law. A Justice Department statement said the Criminal Division determined there was no “violation” and that “all relevant components of the Department agreed with this legal conclusion.” In other words, no laws were broken. The IG will testify to Congress, so we can compare his case to the Justice Department’s.

If Democrats want to pursue impeachment on this thin gruel, then Americans should also consider the process by which this became a national political crisis. First a whistleblower who is still unidentified brings a complaint based on what he heard about a President’s phone call. By the way, the OLC memo says in passing that the IG’s review acknowledges “some indicia of an arguable political bias on the part of the Complainant in favor of a rival political candidate.”

Then the IG makes a flawed legal judgment that Congress must see the complaint. When his argument is rebutted, word leaks to the press, Congress cries coverup, and suddenly we are putting the country through another impeachment upheaval.

Is anyone else troubled that this is all it takes to impeach a President? If a bureaucrat who dislikes a President can trigger a complaint based on hearsay that forces the disclosure of presidential diplomacy, the conduct of foreign policy will be severely hampered. Democratic Presidents won’t be spared once Republicans figure out how this works.

Mr. Trump’s refusal to abide by the normal guardrails of presidential decorum is often offensive. It can also be risky—for himself and U.S. interests. We have often criticized him for it. But impeaching a President is voting to annul an election, and that should require far more evidence than we have from this Ukraine phone call.

Democrats may not be able to stop themselves now that Speaker Nancy Pelosi has joined the impeachment parade. But the voters should ask if impeachment on these terms will do far more harm to American democracy than Mr. Trump’s bad judgment.