Uber Technologies Inc. UBER -1.41% said it received 5,981 reports of sexual assault involving U.S. passengers or drivers during 2017 and 2018, underscoring the risk that has been a chief criticism of ride-hailing companies around the world.

In a report released Thursday, Uber voluntarily disclosed the first comprehensive review of safety issues involving its ride service. Sexual violence in particular has been a challenge for Uber as well as rivals including Lyft Inc. and China’s Didi Chuxing Technology Co., prompting heightened pressure from lawmakers, advocacy groups and customers to address the problem. 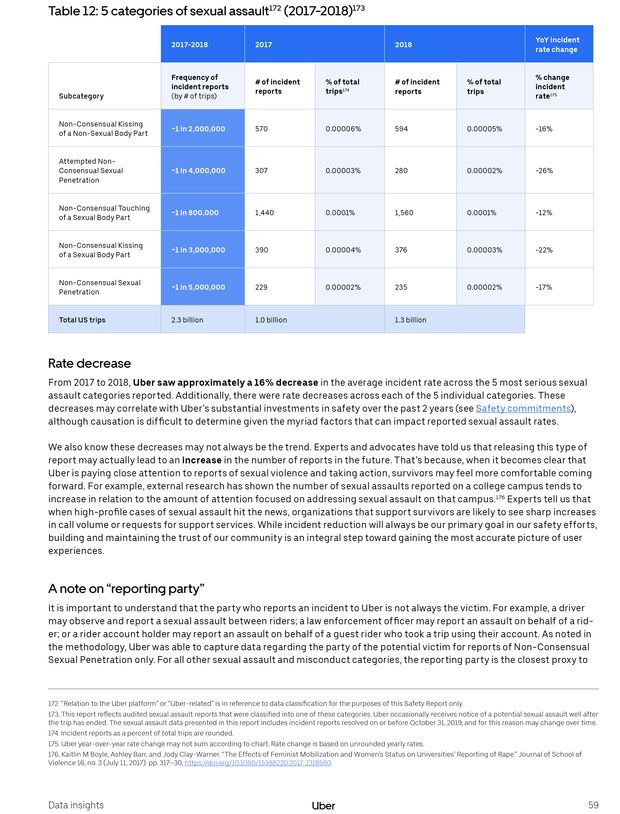 Uber has long faced criticism for its screening process for drivers, which has in some cases allowed people with serious criminal backgrounds to drive for the company. Click or tap to read the full report. Uber

Nonconsensual touching was the most prevalent type of sexual assault that occurred during or in conjunction with Uber trips during the two-year period, according to data compiled by Uber, with 1,560 reported incidents last year. There were 515 incidents of rape or attempted rape in 2018.

But Uber’s numbers may be much lower than reality: sexual assault is chronically underreported.

Numerous organizations that work to end sexual assault and domestic violence applauded Uber’s report for raising awareness of the issue and encouraging more survivors to report acts of violence. A spokeswoman for Jane Doe Inc., a coalition against sexual assault and domestic violence, said Uber’s report shows “how seriously they are taking these issues” and how the company “can play a role in supporting survivors and preventing violence.”

During the two-year period, 19 people died from physical assaults that occurred during or were related to an Uber trip, according to the report, including eight riders and seven drivers. There were 97 fatal car crashes involving an Uber ride, with about 65% of those crashes involving another car and 31% involving a pedestrian or bicycle.

The report doesn’t include safety incidents outside the U.S., which may be significantly higher in regions with more violence where Uber operates, including Brazil and South Africa.

Uber has long faced criticism for its screening process for drivers, which has in some cases allowed people with serious criminal backgrounds to drive for the company, as uncovered by city officials in Houston a few years ago in the course of an audit. Last week, Uber lost its license to operate in London in part because of a loophole in its app that allowed 14,000 unauthorized drivers to ferry around passengers, posing as Uber drivers.

At a Wall Street Journal conference last month, Lyft co-founder and President John Zimmer pledged that his company would improve safety for riders and drivers amid allegations that some of its drivers had sexually assaulted and raped female passengers. Dozens of women have sued Lyft in recent weeks, alleging they had been assaulted by drivers working for the ride service, and that Lyft mishandled their reports.

Uber said in its report that during 2017 and 2018, more than a million prospective drivers didn’t make it through Uber’s screening process.

The company also highlighted a number of safety improvements it has made to its service, including an emergency button in the app to call 911 and the ability for passengers to have a loved one track their ride and know when they have arrived. The company said it has tripled the size of its safety team since 2017.

While the numbers are startling, the incidents represent a fraction of the 2.3 billion Uber rides completed during the two-year study. The vast majority of trips on Uber—99.9%—are completed without any safety related issue, Uber said.

“In the United States alone, more than 45 rides on Uber happen every second,” said Uber’s chief legal officer Tony West. “At that scale, we are not immune to society’s most serious safety challenges.”

Write to Heather Somerville at Heather.Somerville@wsj.com